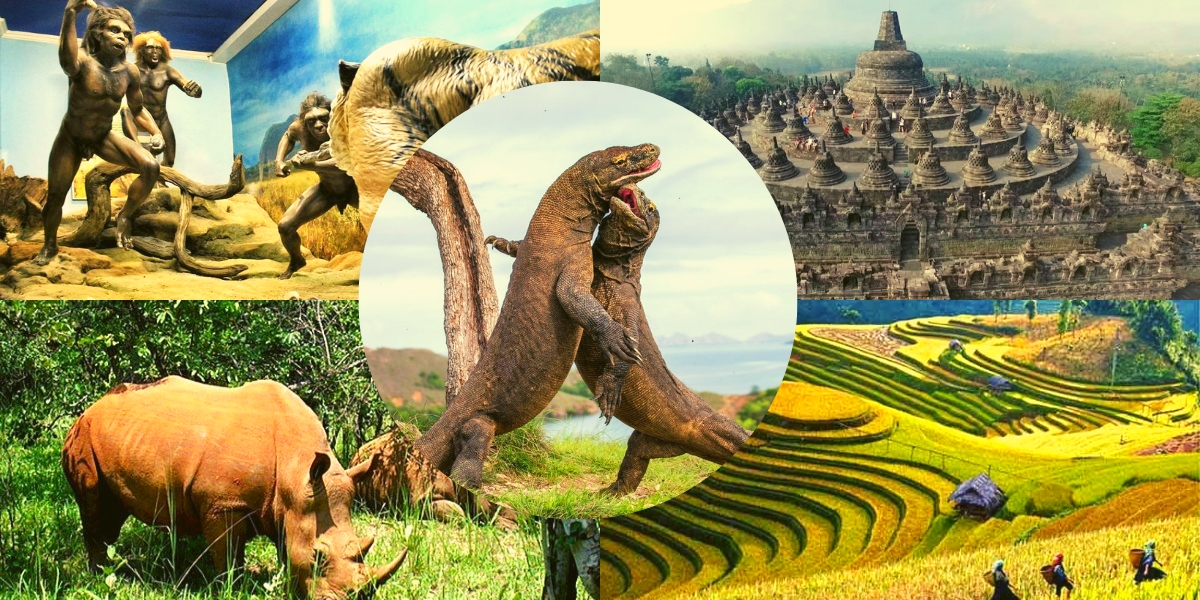 Indonesia is one of the largest countries with a large population. Indonesia is a unique country because it has many regional languages, cultures, history, and natural wealth. This is one of the reasons why Indonesia has many world heritage sites that have been recognized by UNESCO.

The land and sea that stretch across Indonesia are indeed very amazing, and some of them are not yet known to many people.

If you are planning to take a vacation in Indonesia, then some of the tours below can be added to your list of vacation tours.

Want to see ancient animals that still exist today? You can try to visit the Komodo National Park in Indonesia.

Komodo National Park includes 3 large islands, namely Komodo Island, Padar Island, Rinca Island, and other small islands. With a land area of ​​​​173,300 hectares, this place was designated by UNESCO as a World Heritage in 1991.

Here, there are not only rare animals that only exist on this island, namely the Komodo, but there is also a natural aesthetic beauty that stretches across this Komodo island.

Located in Banten, this place has an area of ​​122,956 hectares and was designated as a world heritage by UNESCO in 1991.

The Javan Rhino, the seal, Surili, and the Javan Gibbon are all protected in Ujung Kulon National Park. You can visit here and see these rare animals that only exist in Indonesia.

The largest recognized site in the world was recognized by UNESCO in 1991 with 1467 reliefs and 504 stupas in the Borobudur temple. This historic site is said to have been built during the Syailendra dynasty in 800 AD.

This Borobudur Temple has 3 assessment criteria for OUV (Outstanding Universal Value) by UNESCO. The first is from the temple complex that forms a pyramid without a roof, consisting of 10 sequences upwards with a Cuban crown at the top. Secondly, this temple complex is called an example of art architecture. Indonesia from the beginning of the 8th century to the end of the 9th century. Third, this Borobudur temple forms a lotus flower, which is a symbol of the purity of Buddhists.

It took Unesco 12 years to approve this place as a world cultural heritage site, which was designated in 2012, although at that time the government had proposed it in 2000.

Subak is an organization owned by farming communities in Bali that manages rice fields with a traditional irrigation system. This Subak area has an area of ​​​​approximately 20,000 hectares and is located in 5 districts in Bali, namely Bangli, Badung, Gianyar, Tabanan, and Buleleng.

If you go to Bali, it’s not only the beaches that you can enjoy, you can also try here to see the beauty of the subak cultural landscape that stretches out unique rice fields, with a beautiful and cool rural atmosphere.

The Sangiran archaeological site became one of the historic tourist attractions recognized by UNESCO in 1996, earning the nickname “Sangiran Early Man Site.”

Unesco considers this place to be key in understanding human evolution, which includes many aspects such as cultural, environmental, and physical evolution.

You can come here to see how ancient human skeletons were to increase your knowledge.